A busy manager is a bad manager 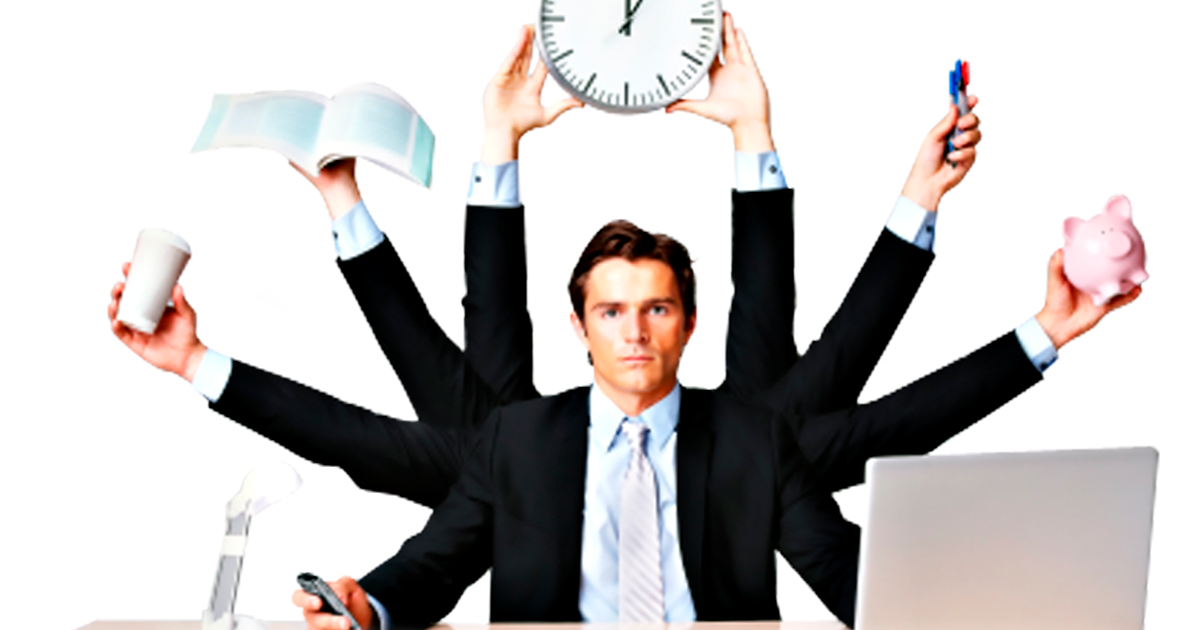 It’s a hard and fast rule that in order to achieve major goals, you need to expend a lot of physical and mental effort, coupled with a lot of willpower. But sometimes the head of a business is like a hamster on a wheel in his application of this. He’ll labor 12-16 hours a day, literally sacrificing himself to his company.

Sooner or later, these massive efforts bring results, and the self-sacrifice is a source of pride: the boss earns the moral right to say that his dedication enabled him to lead the business to success. But it is more likely that the “hamster-wheel syndrome” is the sign of an incompetent boss.

“No one can do better than me”

The boss is responsible for his entire team’s performance. He will have to report either to the client or to his superior for any blunders on the part of his subordinates.

Sometimes, in an effort to avoid such headaches, the boss opts to do the work in lieu of his subordinates, especially if he’s qualified to do so. For example, if a translation project manager doesn't trust the editor and also has editorial experience, he may decide to edit a translation himself. The project manager might reason that he alone is capable of correctly fulfilling the order of a picky client, and so he’d better not pass it on to any of his subordinate managers, because, for example “they’re not really ready for something so complex.”

The result is a paradoxical situation: the manager ends up working until midnight on work that should be delegated to his subordinates, while the subordinates are left twiddling their thumbs. The boss is too busy to provide them with clear objectives.

Such an approach to management might even produce good results for the company. But such a company is a colossus with clay feet. A boss whose modus operandi is that “I can do it better than anybody else” makes it impossible to develop a strong team. He takes upon himself the most insignificant decisions and becomes irreplaceable: there is no issue that can be resolved without him. As soon as he leaves for vacation, the company falls apart, because the team does not know how to make decisions independently. Once he gets back from vacation, he grumbles: “I can't trust you with anything!” And once again he harnesses himself to the cart. He gradually revives the projects that languished without him, and he proudly says, “That's the way to do it!”

This style of leadership leads to a dead end. It provides short-term tactical success, but strategically it leads to failure.

Even if the boss has a cast-iron constitution and is fanatically devoted to the company, his physical endurance is not unlimited. His team is relegated to mindlessly following step-by-step instructions, seeking constant approval from management, without ever taking independent action. Under such conditions, the staff simply don’t develop. Meanwhile, the boss bumps up against the ceiling of his physical endurance, because there are only 24 hours in a day.

If the volume of work suddenly increases (for example, a big order suddenly comes down the pipeline), the company faces a crisis: complaints from clients come flowing in, project deadlines are broken, the manager is exhausted from all the work, and his subordinates are unable to do anything on their own.

The boss is supposed to lead rather than doing his team’s work.  To avoid time crunches, he has to be able to delegate work, so that it's performed without his help. This will free him up to work on other issues. If a subordinate finds it difficult to carry out an assignment, you need to support him, train him — and even give him room to make a fixable mistake. Tactically, this leads to delays and more work, but strategically, in the long term, training subordinates, developing in them professionalism and independence will free up your own time.

The conundrum here is that training and preparing subordinates takes much more time than simply doing the job yourself.  The boss finds himself in a vicious circle: to free up time in the future, you need to spend some time right now, but that’s what you don't have.

And the reason you don't have time is that you failed to devote time to training your subordinates earlier.

To break out of this vicious circle, you need to make an incredible effort and sacrifice a lot, for example, giving up some of your orders or simply boldly delegating some of the tasks to your subordinates.

But the most important thing is to recognize what caused your chronic lack of time.

"Everyone needs to be monitored"

Some bosses are sure that if they don't track every step taken by a subordinate, they will waste time on extraneous matters. They see their mission as micromanaging the smallest actions of every employee, walking around the office, looking at monitors, constantly asking about the status of a job, etc. Micromanaging takes a lot of time, so these bosses are always very busy. But their effectiveness is, as a rule, extremely lackluster.

As in the previous section, we see the results. Again, we come up against a catch-22: when employees are continuously being monitored, they really do start working only under pressure, and when the boss is away, the staff immediately shifts gears. This further convinces the boss that he's got the right approach, and he doubles down on using an iron fist with his staff.

The vicious circle in this case follows this scenario. For an employee, total control over his or her actions is equivalent to a silent message: "You’re a deadbeat, and not worthy of my trust!” This offends the employee, and programs the following response: "What’s the point of doing work when you don’t see it? Just the same, you won't appreciate it!“ The resulting atmosphere among the team members is toxic, since everyone is spending a lot of effort engaged in a subconscious confrontation. The team begins to consume itself. It is hardly likely to achieve high results in the long run. The most optimistic prognosis for it is stagnation.

A much more rational approach for the boss is to proceed based on the notion that employees can and want to work, even if they are not being micromanaged. Most people don’t want to beat the system if they consider it to be a fair one. And the ineffective employees can still be easily identified by the end results of their work.

Let's imagine that the boss has successfully delegated authority to his subordinates, and the team is functioning smoothly without his personal oversight. He finally has free time. But he begins to experience a guilt complex: "Everyone’s busy working, but for three hours a day I have nothing to do.” And he begins to “help” his subordinates, taking some of their work from them.

This kind of thinking leads back to the hamster wheel. Sooner or later, something will happen that requires immediate attention, but the boss doesn't have time to deal with it — he’s busy with work that’s not his to do. For example, if the staffing manager asks for a decision on a candidate for a position, and the boss is busy with some editing instead of managing, he’ll put off making a decision. Meanwhile, the promising candidate, tired of waiting for a decision, finds a job elsewhere. There should always be time set aside for urgent tasks.

The boss should see the situation in its entirety. Instead of helping his subordinates in his free time, he needs to think about how the company should be developing, what its weaknesses are, and how to grapple with them. As soon as his thoughts flow in this direction, the free time will quickly be filled with higher-level tasks: training, streamlining processes, working out strategic development plans, generating and translating new ideas, experiments, etc. He will cease to be a firefighter, and will become an architect.

For the most part, the boss should be occupied with strategic tasks that require a creative approach. If you’re doing routine work, you need to ruthlessly dispose of it — by automation or delegation. This will free up time to consider what the company will become in the span of five years, and what needs to be done to this end. You can see if your “troops” are moving in the wrong direction only if you look at them from above.

This approach requires constant development – regarding both the boss and subordinates. Your troops will have to wade through the jungle by themselves, and for this, they need a capable leader. In other words, you need to train your successor, while you yourself go higher, even if it seems that there is no higher place to go.

For many bosses, this logic is incomprehensible. They fear that teaching a successor means chopping off the very branch they’re sitting on: teach someone, and he will usurp you, and you yourself will be extraneous. In practice, the opposite happens: if the boss succeeds in organizing processes in the company so that it can function without his intervention, then any business owner would gladly hire him and pay him dearly to repeat this success at his company. If the manager himself is the owner of the business, he can either take a well-earned vacation or start another successful business guided by the same principles.

Keep in mind that there is a big difference between competent delegation and thoughtlessly shifting duties. If you suddenly stop working and transfer your duties to your subordinates, then chaos will quickly ensue. People won't have the time to prepare, either psychologically or professionally, for their new roles and may simply freak out and quit. Preparing each team member for a new level of responsibility is a long, complex process that has little in common with teaching someone to swim by throwing them in the water. And teaching is just part of it: You also have to infect them with energy, convey your vision, teach them to think differently.

The ideal leader should organize the company’s processes so that it runs like clockwork. Ten years of working 14 hours a day is a sign of inefficiency, a testament to the fact that over 10 years the boss has failed to find or didn't even look for a way to free his company of his own self-sacrifice. Bosses like this usually boast: "I give my company all of my time!” And they spend the entire day on manually performing routine processes, when it would be worth devoting at least one hour to improving and automating them. They can’t comprehend that, over time, this hour will save them weeks and months.

From the outside, a constantly busy boss looks like an overachiever, which increases his status in the eyes of others. But it's much easier to hoard all the work than it is to construct and hone a mechanism that can operate on its own.